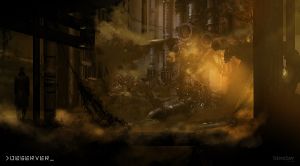 The Great Decimation, colloquially referred to as 'the Big One', was a global-scale conflict waged in the years 2052-2059 across multiple continents and involving the majority of world nation states. The conflict completely reshaped the global geopolitical spectrum and rendered vast areas of the world uninhabitable due to radioactive fallout.

The origins of the conflict can be traced back to the 2020s, which saw the gradual economic descent of the USA and the growing power of China, the latter of which culminated with the reinstatement of the dynastic Middle Kingdom. Tensions between the two superpowers rose, until finally, on October 7, 2052, a seemingly benign trade dispute in the Pacific resulted in a violently escalating conflict.

Feeling threatened by the growing military potential of China, and bent on reestablishing its superpower status, the New Russian Empire decided to take advantage of the situation. On January 2, 2053, Russian troops entered the Middle Kingdom with the aim of establishing a foothold in the Altay Prefecture.

Pressed from both sides, the Kingdom decided to retaliate using the full power of their nuclear arsenal. In a desperate attempt to eliminate the remaining launch stations, the USA responded in kind. Nuclear fire rained over densely populated areas of North America, Mainland China and Western Russia. The three superpowers engaged in mutual decimation, engulfing the world in nuclear flame.

Despite vast parts of their territories being made uninhabitable, the Russian military machine was still largely intact. It soon turned its gaze to the West. The Old Continent came was still largely untouched by the war and its military power could not rival that of the NRE. Not willing to risk further nuclear escalation, Russia began its march towards the Atlantic on September 16, 2053.

With the Western-European Confederacy torn by internal conflicts, the Fourth +Polish Republic was forced to face the invading forces alone. Following a nationwide draft, preliminary forces were dispatched to defend the Eastern border. Few realized they would not see any reinforcements for the next five years.

Negotiations between the government and the National Board of Directors delayed the deployment of PMCs, which at that point comprised the majority of the Polish armed forces. The dispute was allegedly caused by the growing demands of corporate representatives.

Meanwhile, the situation on the Eastern Front grew increasingly dire. Remnants of the national armed forces fought valiantly and with unparalleled dedication. As some correspondents noted, wounded and maimed soldiers were literally put back together on the spot and sent back into the fray. Field doctors, or 'rippers' as they would come to be known, were forced to reuse cybernetic prostheses multiple times, often operating with little or no anesthesia. The losses were astronomical.

With the growing threat of defeat, the National Board of Directors decided it was time to capitalize on the situation. They publically accused the government of bickering over menial matters and blamed them for the situation on the Eastern Front. On December 2, 2058, corporate military forces took control of the capitol and staged a coup d'état. Pledging to put a swift end to the war, the new corporate leaders were met with overwhelming enthusiasm from the public at large.

Before the new corporate government was able to mobilize their forces, the war took an unexpected turn. On February 13, 2059, armed insurgents staged a bloody coup in the heart of the Western-European Confederacy. Having taken control of major government and military installations, the insurgents made one final, desperate attempt to end the war. Once again, nuclear fire rained from the sky, decimating the entrenched NRE forces and turning vast areas of Eastern Europe into a barren wasteland.

The National Board of Directors could not have asked for a more favorable outcome. They have won the war without putting a single dent in their privately owned military forces - which they could now use to disarm what remained of the national army and reinforce their newly established rule over the Republic. In a famous address on July 16, 2059, Chairman Hoffman proclaimed the creation of a new state, with himself and the Board as governing bodies. A great wall was raised along the Eastern border, bringing about a new era of 'Glorious Isolation'. Thus began the Fifth Polish Republic.