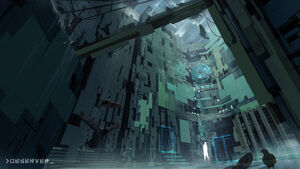 A large holographic projection within a courtyard.

Holographic Projection is a technology in the world of Observer.

In the late 2020s, advancements in holographic technology allowed to create high-fidelity spatial images transmitted via a small projector. At first, they were mostly used as a simple form of entertainment, succeeding the television sets of the 20th century as the go-to past time for the majority of citizens. As projectors became cheaper to manufacture, the technology gained new and interesting applications - one of them being a substitute for interior design. Holo-projection allowed to expand the limited living space, while also allowing the inhabitants to fully customize their domestic environment. Although the visual quality of these "holographic households" was far from perfect, it was still an improvement over the drab decor of many lower-class apartments.

In the 2060s, holo-projection found a new and surprising use in architecture. While holographic elements had been previously used in the upper class districts to add a bit of flare to a building"s facade, in 2062 they started to be installed en masse in class C tenement buildings. This was all part of Chiron"s new "urban refinement" program. Unable to physically renovate such vast areas, corporate executives opted for a cheaper solution - the projectors would create a holographic facade, covering the decrepit walls and interiors, creating "a sense of clarity and serenity". This was intended to boost the morale of class C inhabitants, but the results were mixed.

Tenants saw it as more of a stopgap than an actual solution and compared it to putting a fresh coat of paint on a rusty old clunker. They also complained about the increased rate of power outages, as well as disorientation. The latter proved especially troublesome, with frequent cases of tenants accidentally walking into walls, or - in extreme cases - falling down shafts and crevices obscured by a faultily placed hologram.

Due to the lukewarm reception, the "urban refinement" program was dropped after a few years, but the holo-projectors are still a common sight in C district tenement buildings.